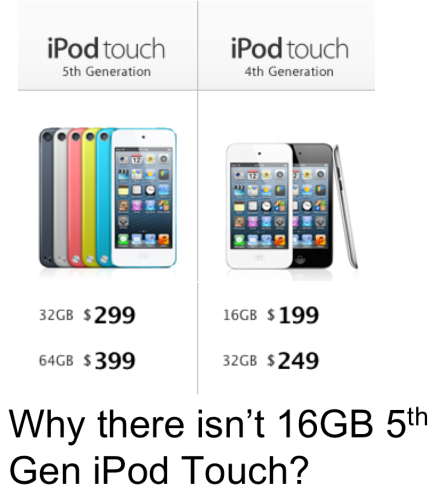 Update on 9/13/2012: While this article is dated, look at this in the context of 5th generation iPad Touch pricing. Apple kept their 4th gen iPad touch, the 16GB and 32GB versions and only introduced 32GB and 64GB versions for 5th gen. As you read this article you will follow their likely reasoning.

I do not know more about iPad2  or its release date than what is already known through news media. However, I am here to make predictions about how iPad2 will be priced.

Given than even iPod Touch has retina display and front/back cameras for Facetime, it is a safe bet that iPad2 will have these features as well. Traditionally, when Apple introduced nextgen of any of their product they added lot more features but kept the price the same.

Apple most likely underestimated the demand for iPad and priced at inelastic part of demand curve. They are likely to consider better price realization with iPad2 and correct past mistake for at least three reasons

By offering the “crippled” (not really, figuratively speaking) older version along side higher priced and richly featured newer versions, they let their customers self-select themselves to the one they are willing to pay.

This however does not mean offering 6 versions (as there are cognitive costs to customers). So here is my prediction for iPad2 versions pricing.

4 thoughts on “How will iPad2 be priced?”