Depending on where you stand and which articles you read recently there are six possible permutations.  If you had recently read what Fred Wilson, a Venture Capitalist, wrote you are  mostly likely to write down

Is that all to it?  According to research done by four business schools, this permutation defines only one of two classes of VCs. More precisely, there are two schools of thoughts of how VCs make investing decisions. The second class of VCs believe the right permutation is,

While Fred Wilson makes a compelling case to get product-market fit correct, then define your strategy and then worry about making money, a VC who falls in the second category will argue, equally eloquently, strategy (making choices about segmentation and needs to serve) first, finding how you add and capture value (business model) is next and what the offering (product) is last.

The two ways of reasoning are called  Effectual and Causal reasoning respectively.

Effectual – Instead of doing market research, competitive analysis, value analysis etc, go build something and keep iterating on it and building a growing customer base. Then worry about strategy and business model.

Causal: Start with customer segmentations and their unmet needs (or jobs to be done).  Make choices on the right segment you should target first and understand its value perception, alternatives and willingness to pay. Define a product version that serves that segment and offer at a price they are willing to pay.

So when you have two classes of entrepreneurs and two classes of VCs, the next obvious question is which pair would work together well. The aforementioned research suggests, cognitive similarity (“I like how you think”) was a decisive factor in how VCs decide choose to invest in startups.

Their study was conducted on 49 partners from different VC firms, by presenting them 16 different hypothetical investment opportunities and asking them to rate how likely are they to fund these ventures. From these 784 data points, the researchers employed conjoint analysis to tease out the influence of individual factors on VC’s decision. This is approach is far better than stated preference studies that ask VCs for their rating and data mining studies that succumb to data errors. 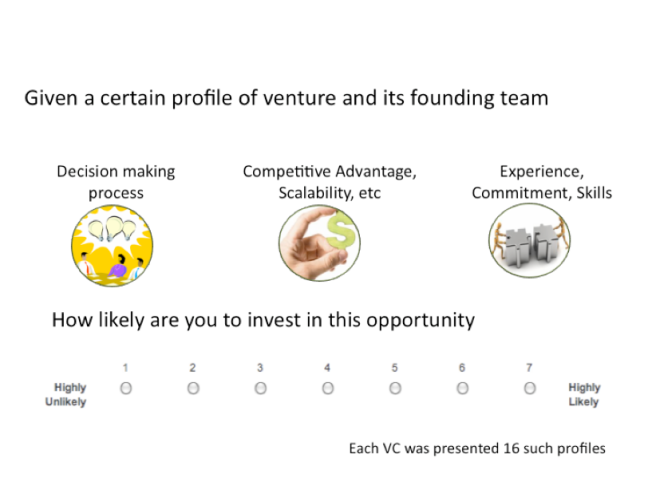 The number one deciding factor?  How similar the thought process is between the VC and the founder. The researchers call this cognitive similarity, which has nothing to do race, national, education, gender or other physical characteristics. It is how a founder thinks and how similar it is to VC’s thought process. Higher the similarity, greater the chances of getting funding.

Everything else, including the perception of the team, its experience and commitment (human capital) are influenced by VC’s reading of founder’s thought process.

“A founder who demonstrates cognitive similarity with a VC is more likely to be perceived in a positive light, and viewed as better positioned to make effective use of his or her human capital”

All other positive attributes we hear about, the product’s competitive advantage, scalability, founding team’s ability to hustle, their focus etc seem to be bestowed after the fact.

What does this mean to you as a startup founder seeking venture funding?
You are better off seeking those VCs who think like you do in terms of product, strategy and business model. If you think market demand and opportunity size first and pitch to Fred Wilson you are most likely going to come back empty. On the other hand you at least get to play if you think product-market fit first. So knowing how you reason and seeking as venture partners only those who think like yourself saves lots of wasted time and agony.

No, they do not recognize this hidden factor. And I expect comments from a few stating so. In the same study that teased out this hidden factor, the researchers asked an explicit question on how much weight VCs place on cognitive similarity with founders.  VCs rated this as the the least important factor, but when they had to place a bet given a profile of venture and its founders, the hidden influence of cognitive similarity came out loud and clear.

Finally, is Fred Wilson right? Is effectual better than causal?  The proponent of this classification, Professor Saras Sarasvathy, goes one step beyond this mere classification.  She argues great entrepreneurs are ‘effectual’. They opt for doing things vs. analyzing things.  I do not subscribe to this latter part of her theory regarding what defines entrepreneurial greatness.

How do you reason?