A recent CNET article on  why MacBook Air still does not have Retina display makes its argument based on technical limitations and cost,

because the technology is still being perfected it will take time to bring production costs down, she said. And that’s important for Apple, she said. Costs need to come down enough so Apple could use the display in a MacBook Air-class product without jacking up the price too much.

Technical issues are not limitations, if it is important Apple can workaround those limitations. And costs? Anyone can compute what the costs are (Henry Ford), but price always comes first. Since when did Apple  price its products based on the cost to make them?

To answer (1) and (2), after misleading you to think that these are really two different segments and two different jobs I posit here that it is really the same segment and same job. Apple is simply offering two different candidates for the same job, making the customer choice be between its two products rather than between Apple’s and a competitor’s product.

Now to answer question (3)- Is there incremental value add from Retina screen?

Let us look for clues in how Apple is pricing MacBook Pro 13″ and 15″ versions for this. Because price is a function of value and looking at pricing we can approximate  customer value perception.

Here is the 13″ MacBook Pro version. I normalized with same 8GB RAM for comparison. The Retina version comes with 8GB RAM and only SSD disk. This indicates these customers see no incremental value from Retina. 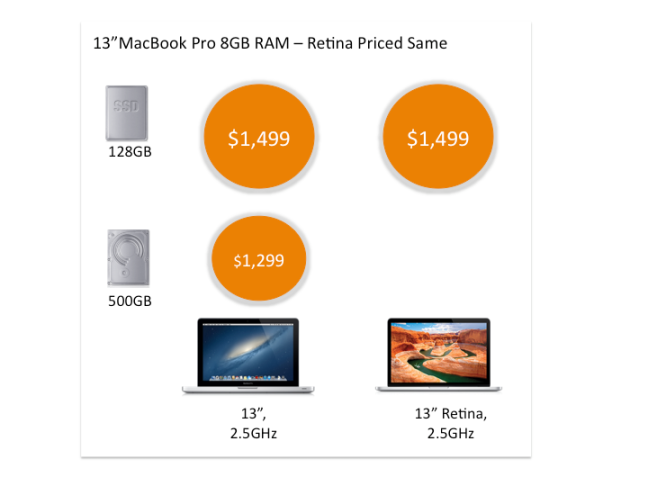 So what does this say about incremental value from adding Retina to MacBook Air? Take a look at the comparison of 13″ MacBook Air and MacBook Pro

Apple seems to be able to capture almost all value it can from MacBook Air with its current pricing and by positioning it as  better portable with longer battery life. There is not much value gap left between the two models that Retina display can fill

The price difference (hence minimum value difference) is $300. That can be explained by

Which implies that if MacBook Air Retina is wedged between these two versions it stands to get no price premium or worse will erode current prices. Apple pretty much will have to offer  Retina only MacBook Air model, replacing current models, at the same prices as current models.

If there is even minimal marginal cost to delivering Retina display in MacBook Air but  if it adds no incremental value  to customers or offers no opportunity to capture that value as price premium, why bother delivering that extra value? (Like not adding earphones with iPad.)

If you do not see MacBook Air with Retina it is because of value and value capture reasons and not technology hurdles.