There is new research out that says this left-brain right-brain classification is just plain wrong.

You can purportedly “diagnose” your brain, “motivate” one or both sides, indulge in “essence therapy” to “restore balance” and much more. Everyone from babies to elders supposedly can benefit. The left brain/right brain difference seems to be a natural law.

Except that it isn’t. The popular left/right story has no solid basis in science.

If the left-brained right-brained theory is simply proved wrong with data and analysis, then it  makes no difference. Both sides continue to go on their good lives. 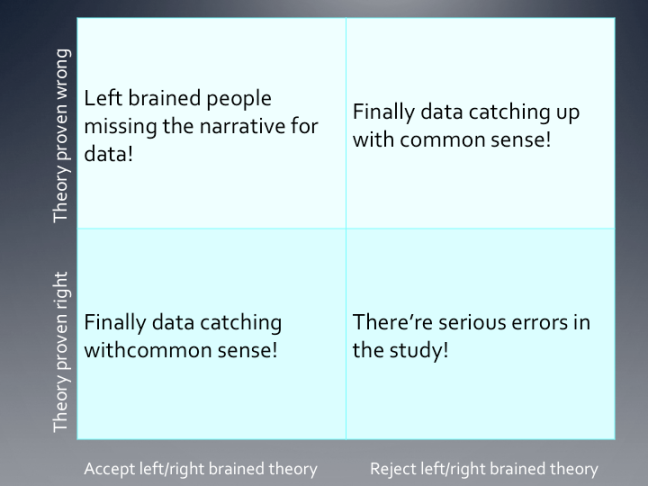 What if instead of simply proving the theory wrong the new research introduced yet another theory of its own? Say top-brained bottom-brained theory. Which is exactly what the said research did.

There is a better way to understand the functioning of the brain, based on another, ordinarily overlooked anatomical division—between its top and bottom parts. We call this approach “the theory of cognitive modes.” Built on decades of unimpeachable research that has largely remained inside scientific circles, it offers a new way of viewing thought and behavior that may help us understand the actions of people as diverse as Oprah Winfrey, the Dalai Lama, Tiger Woods and Elizabeth Taylor.

Now things are different, at least for the believers.

Or so says Kathryn Schulz, another author (of Being Wrong) and TED speaker. According to Schulz, bad ideas die-hard because they can only be replaced by another equally bad idea. She wrote you can’t replace bad ideas with reason but only with another bad idea.

If Schulz is right and you believe in her logic then …. oh forget it, this is getting circular, I guess I need to quiet down my lizard brain.