You know what IBM Watson is. But if the title of this article did not make sense to you, consider yourself lucky. You are lucky because you have not been exposed to or worse put through a highly questionable and non-scientific but popular method of personality test called Myers-Briggs.

Your luck however just ran out as you are reading this. M-B test classifies people into 16 groups labeled by a set of four letters with 4 four possible options for each letter. They do that based on your answers to a personality test. Many researchers have written in-depth about the flaws in this test. You can find those here, here and here.

Simplest objection to Myers-Briggs is this is not scientific. That is to say it did not start with a hypothesis, did not do controlled experiments, did not account for limitations of methods and its methods, and its results are not reproducible. That does not stop businesses and managers from using it, making their people take the test and even asking them to post the four letters on cubes for everyone to see.

There is indeed an insatiable interest among us to measure personalities, to get a view into our minds, to see who we are, to know more about our employees, customers, followers etc. Tapping into this interest IBM Watson introduced a new Personality Insights tool.

The IBM Watson Personality Insights service uses linguistic analytics to extract a spectrum of cognitive and social characteristics from the text data that a person generates through blogs, tweets, forum posts, and more.

Unlike the lengthy list of either-or question based tests you take for M-B and other tests, with Watson’s test  you cut and paste your blog postings, public writings, tweets, emails and anything you willingly shared with others. Based on text, sentiment, pronouns and linguistic analysis, Watson tells you who you are.

At first take, I expressed my skepticism of this method. I am changing my stand here, not because I find the insights to be an accurate description of me but because I spent time reading their detailed description of methodology, data and limitations. In other words the science behind this. 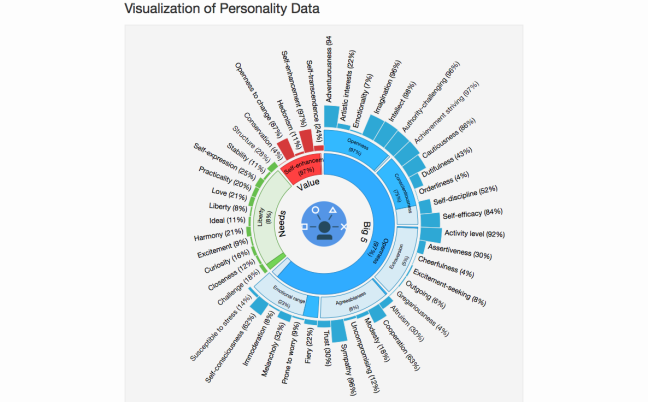 Does this test work or is it relevant to you? I do not know, but at least you know now the level of rigor needed before you pay up big fees for personality tests. IBM Watson’s Personality Insights tool gives you the ammunition to dismiss unsupported and unscientific personality tests.