I should not be surprised and in fact I am not. I am however dismayed to see we still live in a world where everyone wants to teach entrepreneurs and businesses something or other from movies to sporting events. When I wrote the parody on “lessons learned” from Catching Fire, I was hoping it would stop others from creating such content. But that was a mere wishful thinking. Lo and behold we have from none other than Forbes (like the lessons learned from Superman movie)  branding lessons from Catching Fire.

There is no wink or nudge. No hope of author laughing out loud at the end, letting you in on the joke. This is all serious and real.

I want to show you my tongue in cheek lessons and what Forbes calls out as serious lessons.

If you accept any of these five as valid lessons Catching Fire movie teaches, you must also accept the five fake lessons I list. By extension any number of lessons on anything else anyone says it teaches.  That simply means the movie is not teaching anything, it is all in the minds of blogger trying to beat a deadline.

Think about it. If every movie (event, sports, farmers market etc.) can teach hundreds of lessons and there are hundreds of movies, events sports, when will we ever get time to do the work of creating a product and serving our customer needs? 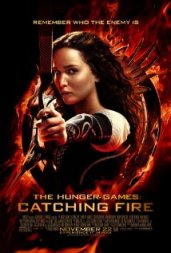 Last night a friend of mine and I saw second part of The Hunger Games franchise, Catching Fire.  Note:  Spoilers below! If you haven’t seen the movie yet, you might want to stop reading. But then again, it’s Katniss. You probably know the story already.

Afterward, as we left the theater,I was thinking about what the movie had to say about entrepreneurship. (I can’t help it as I constantly look for lessons in every activity I do. It is almost a disease one would say.)  Nobody actually starts a business in Catching Fire, but the movie is as much about hustle, networking and customer development to achieve a worthy goal as it is about action and killings. In other words, film’s heroine, Katniss Everdeen, embodies the best principles every startup founder must adopt. Here are my top takeaways:

1. Always Be Lean and Hungry

Katniss Everdeen came out alive at the end of part one. She was declared winner along with her partner Peeta Mallard. She was rewarded with incredible wealth by the evil Capitol. In part one she had to hunt for her food and starve other times. With all the reward from winnings she had everything she wanted in part one and yet she continues to live the same life as part one. She lived lean, continued to hunt and did not splurge except for the new house she moved into which the Capitol gave. Staying true to her core principles helped her through the travails of second Hunger Games. Had she been relaxing and enjoying the spoils of her newfound wealth she would have been one of those to get killed early on in the movie.

Entrepreneurial wisdom: I can see so much similarity to startups winning the first round by securing Series A funding. Competing hard with others with similar Apps like yours, you managed to get funding from evil VCs (like evil Capitol). That is just part one. You still have part two and part three (part four in the movie version) to go. If you stray from your lean principles, lose your agility and hustle you will be least prepared for part two. But go ahead use some of the money to move into new fancy office in the City like Katniss did.

2. Trust in your team

In part one Katniss was a lone wolf. She had to fight for survival on her own. In part two she could not have survived without her team. At first she was looking at the people who wanted to team up and work with her with complete suspicion. She could not trust the motives of Finnick Odair (like Twitter’s Ev could not trust  Jack, or something like that). It was the sheer muscle power and ninja like skills of Finnick that saves her many times. She also wouldn’t trust the brain powers of Betee and Wiress but it turns out her hustle and grit alone were not enough. Katniss survives only because of Betee and Wiress.

Entrepreneurial Wisdom: You definitely need a team to succeed. You can’t play every position as your startup grows. You should learn to hire the right skills for right jobs and trust them. At some point in your growth cycle you need someone formally trained in business, like Katniss hired Betee and Wiress you should hire MBAs to do your business development, strategy and other business stuff.

Remember one thing, you should not start a company with someone you will not be competing with in The Hunger Games.

There is hardly any stretch in the movie Katniss speaks. It is all action. Her action made her team believe in her and follow her as a leader.

It came as a big surprise to me when Katniss discovers, with help from looney sounding Wiress, that events in the Arena follow a rhythmic pattern and repeat in sequence. The monkeys, gas, toads, etc. all repeat in cyclical pattern. Once Katniss figured it out it helped her anticipate and plan ahead for the next big one.

Entrepreneurial Wisdom: Like Katniss figured out you must figure out the cyclical pattern events follow in your business. Everything in business has a pattern to it. If you find out before others and prepare ahead you get to stay alive and win in the end.

5. Ideas are worth nothing, execution is everything

Everywhere Katniss goes she was on camera. Every word she utters can be heard by the game makers. There is absolutely no secret she could keep. And Katniss did not let that slow her down, she simply used that to her advantage. When she knows the Capitol knows her every move she simply focused on better execution.

Entrepreneurial Wisdom: As a founder you may be too secretive about your startup, product and technology. I am perplexed by those asking me to sign Non-Disclosure Agreements just to have coffee with me. Get over it. Ideas are worth nothing and everyone like you has similar ideas. It is all about execution. If you execute faster and better than your competitors,  like Katniss did to her fellow players in the arena, you will live to tell the story.

There you have it, five incredible startup lessons and entrepreneurial wisdom from Katniss Everdeen.

Here is a bonus lesson: Don’t have names with two many vowels like Peeta.

If you liked this article you will also like, “Three Winning Entrepreneurial Lessons from Heats“.

Note: I moved the disclosure from the beginning to the end. Here is what I had before:

I usually would wait till the end to say this is a parody. It appears however, either because my humor is not so good or I am getting so good at deadpanning, the articles seem real and serious to some.

So I warn you, this is a parody (or a weak attempt at it). I have read the Hunger Games book series, was intrigued by possibilities part-1 offered, disappointed by part-2 and outright insulted by part-3.  I did not see #CatchingFire or plan to.

If the article seems serious it is because I am going to model this after a very serious one published in Forbes.